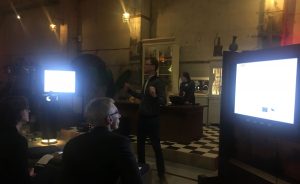 Senior Scientist at the National Institute of Chemical Physics and Biophysics, Dr. Indrek Reile received the Public Choice Award for a presentation “Chemicals around us: how chemical analysis could aid in solving the present-day challenges” at the annual Researchers Night Festival.

The laboratories of NICPB invite PhD students and postdoctoral researchers as well as Master’s and Bachelor students who are interested in a scientific career and outstanding research to join our research teams.

NICPB also welcomes ideas and proposals for extending the research groups and developing our research fields from postdocs as well as independent researchers. For financial support, we would encourage you to consider the following programmes: Mobilitas +, ETAg personal research funding, Horizon 2020, Horizon Europe, etc.

New research topics for students and postdoctoral researchers will be posted here in November, 2020. For interest to join a research topic in NICPB before, we would ask you to take a look at the laboratory webpages and contact the Head of the Laboratory or the research group about joining the research team of interest.

Additional information about NICPB research programmes, researchers and infrastructure can be found on the laboratory webpages.

Estonia has signed the membership agreement with CERN

Estonia has signed the membership agreement with CERN. With this agreement Estonia has become an Associate Member in the Pre-Stage to Membership of CERN.

The new NICPB activity report has been published. It summarises the developments and major achievements during the 2017 – May 2019 period.

Urmas Nagel is the new director of the NICPB

Today, on April 08, 2016, the Science Council of NICPB elected Urmas Nagel the new director of the Institute for the next five year period. Dr Nagel will assume office on April 29, 2016.

The Science Council of NICPB announces

for the position of the Director of NICPB

According to the NICPB Act, the candidate should be:

1) an Estonian citizen who is proficient in the official language (i.e Estonian) to the extent provided by law;

2) a doctorate in Estonia or who has acquired an academic degree equal thereto in another country;

On the 7th December 2015 session the Science Council of NICPB elected the Vice-Rector for Research of the Tallinn University of Technology, Prof Renno Veinthal as its new member and re-elected Research Professor of NICPB, Dr Toomas Rõõm to the Council.

Cultural Foundation of th President of the Republic of Estonia  granted the Young Scientists Award of 2013 to NICPB scientist, astrophysicist Elmo Tempel.